Showing posts from 2010
Show all

Thanks for nothing, Santa

We're in the festive doldrums (i.e., hangover) between Christmas and New Years.

Before starting the Christmas recap, let's give a shout out to Anthony Garcia, the Artistic Director at El Centro Su Teatro. Anthony was chosen as the Theater Person of the Year by the Denver Post. He got extra points for those glasses.


We give another shout out, this one to Terry Wright, who's published The Beauty Queen, A Justin Graves Series thriller.

So how was your Christmas? While we're supposed to receive every gift with gratitude and warm hearts...still, we can get some crap. From KDVR.com, they offer this roundup of the Worst Christmas Gifts Ever.
Our faves:

A package of ground beef.

Any Xmas horror gift stories to share?
See you next year.
Cheers!

It was in a dark and dingy bar, far from the North Pole and obscured from the city's self-knowledge by a veil of shame and hopelessness. I just came in to use the phone--honest.

I sidled in, keeping a hand on my bag, and leaned on the bar, trying to attract the bartender's attention. The place was so dark that, at first, I didn't realize the patron next to me was a deer. A reindeer, in fact. He had a large, red nose, which resembled a Christmas light-bulb. It wasn't lit, but he sure was. He was knocking back what appeared to be his fifth or sixth glass of Old St. Nick--rot-gut whiskey I wouldn't pour for a junkyard dog.

He looked at me and began to talk, which would have surprised me, if I could have been further surprised after seeing a large ruminant sitting on a bar stool in a low-life bar. Now, I'm not in the habit of listening to sob-stories in drinking establishments, but, as I tried to attract the bartender, the deer b…
4 comments
Read more


Yeah...it's been months since I've blogged here. Wow. Sorry. Can I plead exhaustion? Or being 40? Oy.

So, some things have happened since HUNGER was published. First of all, I've updated my website. Didja see? Look at the book pages -- notice any new things? Like all the Hell short stories and novellas? And the Whedonverse section? Yes, cool things abound. Go look. In particular, look at the new things that will be available in the first three months of 2011. Rah!

Speaking of Hellish things, HELL TO PAY is drawing to a close. One chapter left. To everyone who's been reading the novel one chapter at a time, one week at a time, thank you. When I post the final chapter on Tuesday, I'll have some questions for you. (What, I didn't mention there would be a quiz at the end? Oopsie...)

Another thing: I've decided to temporarily close Cat and Muse. That was probably obvious from the lack of new interviews. I…
Post a Comment
Read more

By Jeanne Stein - December 23, 2010
Short and sweet this week. Happy Holidays. From Anna and Me.

A free short story for the holidays!

Though my debut won't hit the shelves until April, you can meet the Iron Druid himself, Atticus O'Sullivan, right now at Suvudu by clicking on this link right here. Clicking on that link and reading the story is absolutely free! The story takes place nearly a year before the events of HOUNDED, so Atticus doesn't know what's waiting for him down the road. Hope you dig it. If you get a chance, head on over to my website or my blog to say howdy.

Speakin' of free short stories, Stacia Kane has also put one up at her site for your reading pleasure. Happy holidays from the League!
Post a Comment
Read more

Gifts you should NOT get for werewolves this holiday season 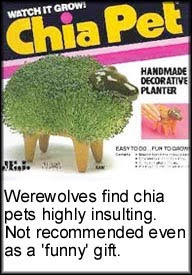 reposted from my blog, Thrillionth Page
It is not easy to buy gifts for paranormals - especially werewolves. While they are typically polite about accepting items they don't like, quietly returning them when you're not around, some gifts that can upset them greatly, and should be avoided at all costs. Hopefully, this list will help.

Do NOT give your werewolf friends and family the following gifts:
1. Any chia pet in the shape of a canine. Deeply offensive to the werewolf psyche.

2. A Friendship bracelet that you worked really hard on, that the werewolf must never take off, and you'll be really mad if they lose it. Because they will!
3. The complete 5-volume Dog Whisperer DVD set featuring Cesar Millan. A werewolf will instantly rip it apart.
4.Nature's Gift Aromatherapy patchouli-scented bliss candles.

5.Actually, because werewolves have such a keen sense of smell, any heavily scented products are poor gift choices.
6. Ten-hour video set of the historic Apollo 11 Lunar Landing…
1 comment
Read more 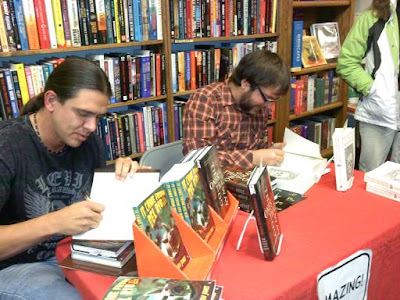 We're all one-digit midgets as we get close to Christmas. Hopefully, everyone is done shopping for presents. I am and they're all in the mail (or UPS).
But we need to pause and announce the winner of our drawing for Juliet Blackwell shwag. Thanks to all of you who posted comments during the week.
And the winner is...Debi Murray! Please send your snail mail address to Juliet at Julietblackwell dot net to collect your prize. Worth gazillions I'm told (in good karma).
Last Friday, the Biting-Edge attended the fantabulous literary smack down between Stephen Graham Jones and Jessie Bullington at the Broadway Book Mall.


I've been working my way through Jones' anthology, The Ones That Got Away. Favorite story so far is about a treacherous ship-wrecked werewolf and the porpoises who get revenge. Weird and fascinating.


Years ago, I got a little blah about the whol…
1 comment
Read more 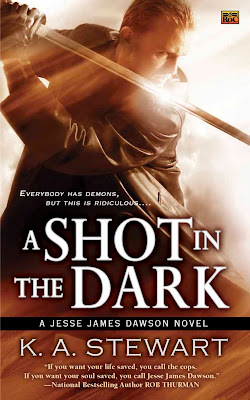 This is my very first post as a Leaguer, and it's to show off my brand new cover!

THE ENEMY OF HIS ENEMY

Jesse James Dawson is a Champion, putting his life on the line for those foolish enough to bargain with demons and fighting to save their souls. But even a Champion needs some downtime, so Jesse takes his annual camping trip to Colorado for some male bonding over friendly games of paintball.

Unfortunately, the fun and war games are interrupted by a pack of creatures summoned up from the very depths of hell by an entity Jesse prayed he’d never see again. With the lives of his friends and a teenager’s soul on the line, Jesse’s only hope may lie with an even more dangerous enemy—his personal demon, Axel…


A SHOT IN THE DARK will be available July 5th, just in time for summer vacation reading!
7 comments
Read more

She's talking about If Walls Could Talk

We're once again welcoming Juliet Blackwell on the launch of yet another series. Is this woman unstoppable or what?
I'm cribbing from Blackwell's bio, and here's what we got. She co-wrote with her sister under another pseudonym, Hailey Lind. They wrote the Agatha-nominated Feint of Art, the first installment in their four-book Art Lover's Mystery series. Since then, Blackwell's penned two more novels in her Witchcraft Mystery series, about a witch with a vintage clothing store, Secondhand Spirits, and the national bestseller sequel, A Cast-off Coven.

This week she released the first in her new Haunted Home Renovation Series, If Walls Could Talk, picked by Suspense Magazine for its Best of 2010.All told, Blackwell published three books this year!


It seems that Juliet Blackwell is everywhere. And considering the architectural flavor of her new series, it's fitting to find a building named after her.

Leaguer bookplates from yours truly for the holidays

Christmas is getting closer, so I'm making my offer once again as a reminder....

One again the holidays approach and soon they will be kicking us swiftly in our fruit cake and before you know it we will be hurrying on into the new year.

But for three more magical weeks, my Grinchlike heart grows three sizes, they say, and I get giddy with holiday love. So now is the season for giving and getting, I'm all sentimentally commercial like that, and to that end I extend an offer to you up through the holidays.

If you plan on giving any of my books as a gift this next month, email me at anton.strout@gmail.com and I will send a holiday-themed bookplate to go along with your gift giving. Aside from a personal bit of written rambling from me, I am also quite prone to drawing some pretty mean snowmen, reindeer, candy canes, what have you.... as long as it's in the US of A. Sorry, both of my international fans!

By Kat Richardson - December 06, 2010
Yup, it's time for me to be really lazy and post something from the good old days. I'll do more old (and maybe new) Christmas posts as the month continues, but for now I give you--and Nicole Peeler--my take on Christmas carols circa 2003:

I read an article, recently, which lamented that there had been no new "classic Christmas songs" written since 1955. I guess that anything which doesn't feature either classical descant or sweet-and-sleepy jazz structure straight out of Irving Berlin doesn't qualify as "classic." Apparently the use of musical aesthetic younger than your grandmother immediately disqualifies a song from being "classic" unless it's by Eric Clapton. (Although I did find one Christmas song site that listed Stan Rogers' 1979 First Christmas. Lovely piece, but depressing beyond belief.) The article went on to whine that only "parodies and humorous songs&…
1 comment
Read more

A GLIMPSE OF DARKNESS 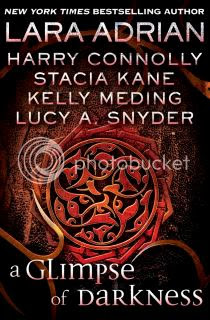 It's been a while since I've posted here at the League, but there's a good reason I'm popping in now. A GLIMPSE OF DARKNESS, the awesome collaborative short story that the amazing Stacia Kane and I co-wrote with Harry Connolly, Lara Adrian, and Lucy A. Snyder, is now available to purchase as an e-book!

You can check it out here at the Random House website.

Also, to help celebrate the release, each of us briefly blogged on the Kindle Daily Post about our experiences writing a collaborative story, as well as submitted questions to each other about the process. Check out the first post by Lara Adrian here.
Post a Comment
Read more 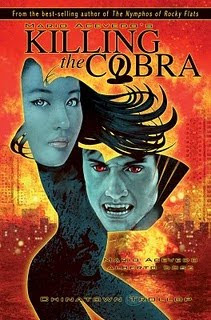 We've got a lot of great writers to pimp this week. An amazing bunch of women authors. Sophie Littlefield, Deborah Coonts, Lori Armstrong, and Caitlin Kittredge.
But first, a word from our sponsor...me.


This Tuesday, my graphic novel, Killing the Cobra: Chinatown Trollop, escapes its cage and is at last, available to the public.
It's undead mayhem at its best. Fangs, guns, one bloodbath after another, electric harpoons, ball gags! Wow! I'm surprised I haven't been arrested for unleashing so much chaos.


On sale at your local comic book outlet, Barnes & Noble, and Amazon.
I'll be signing Sunday, Dec 12, 3pm, at the Broadway Book Mall. Also signing, authors Warren Hammond, Alastair Mayer, David Boop, Laura Reeve, and Win Scott Eckert.
We return to our regular programming.
One of the bennies of being an author is that I've had the privilege of meeting many talented writers. In fact, considering their accomplishments and praises, I wonder if they consider me their pee…
2 comments
Read more
More posts