Today we welcome friend of the League and awesome urban fantasy author Suzanne McLeod to dish about her upcoming release, THE SHIFTING PRICE OF PREY. And look--she brought cupcakes, candy and bacon! I guess we'll have to forgive her now for her very odd (read: British) spelling habits.
#
Hello, and thanks to Jaye and the Leaguers for having me over to visit. Like any good guest I come bearing delicious sugary comestibles! 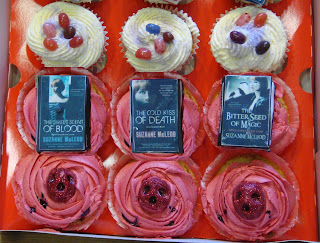 Food is something I like to have fun with— no, I don’t mean in that way! And don’t give me those innocent looks; I know what y’all are like over here. *g* Right, back to food and having fun . . . in the writerly way, which for me is when what a character likes to eat (or read, or wear, or whatever) is the result of deep authorly reflections on worldbuilding and hours of internet procrastination, err, I mean, research! 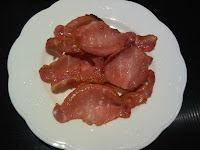 So first up, bacon! Mmmmm . . . Bacon . . . Well, it’ll come as no surprise to fellow bacon lovers that Genny (the books’ main character) also loves bacon, and so her diet consists of BLTs or, if she ever gets chance for a sit down meal in her hectic, spellcracking life, then it’s bacon, egg and chips (sometimes with the odd tomato, since veggies are good for you *g*). But there’s another reason (though it’s not one Genny’s aware of) why she loves bacon – it’s salty and so helps to dampen down her unpredictable reactions to magic. 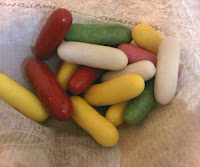 Next: liquorice torpedoes. They’re Genny’s favourite sweets and, as sugar is used in Genny’s world to amp-up magical ability, they’re the ones she always carries with her when she’s spellcracking. But the reason they’re her favourite is because she was bitten by a vampire and has 3V (vampire venom and virus infection) and since vamp venom smells like liquorice, 3V sufferers (who resist Getting Fanged) end up craving anything with a liquorice scent. That might seem an odd bit of worldbuilding, until you discover liquorice comes with a health warning; it can cause hypertension (high blood pressure) which is one of the symptoms brought on by 3V. Other 3V symptoms mimic those of Polycythaemia Vera (PV) which causes high red cell count and makes blood extremely viscous. All of which seemed ideal for a vamp fang-injected virus which addicted those it infected. After all, what vamp wouldn’t want their meal’s blood pumping hard and thick and fast? *g*

And then there are the other creatures!

Naiads love raw fish, especially done sashimi style. (Yep, it’s a tad cannibalistic, but hey, each to their own. *g*)

Dryads have a thing for maple syrup, and turpentine is their ‘champagne’. (Not that
eating/drinking tree sap is in any way vampiric . . .) 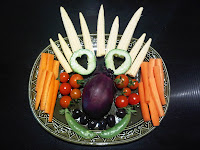 Satyrs tend to be picky vegetarians who prefer their food raw, unless they’re drunk in which case they’ll have a chew at nearly anything put in front of them and can often be found munching happily on the nearest (dryad occupied) tree! O_O

Goblins will chomp on whatever they come across that isn’t quick enough to get out of their way, such as insects, rodents, and the odd feral cat, though really they prefer their food on the decomposing side so are happiest rooting through dumpsters and landfill sites. Oh, and they love anything wrapped in foil – goblins are all about the shiny! :-D 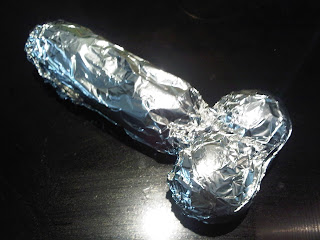 So what food would you match with what fantasy creature and, if you have a reason, why? 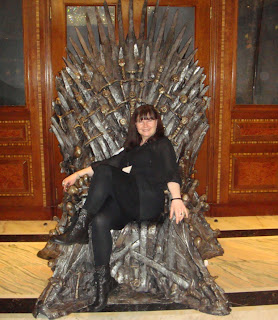 Bio: Suzanne McLeod is a UK author who writes the Spellcrackers.com series, full of magic, mayhem and murder, and liberally spiced with hot guys, kick-ass chicks and super-cool supes! Books #1 - #3 are published by Gollancz in the UK and Ace in the US. Book #4 – The Shifting Price of Prey  – releases on Aug 30 (UK only so far). Outside of the UK it can be purchased from The Book Depository  or Amazon.com . 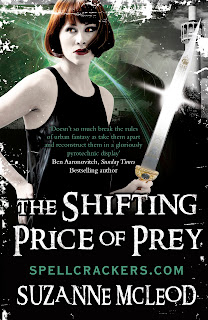 Blurb for The Shifting Price of Prey:

Sometimes a bit of magical help might cost more than you bargained for . . .

London is hosting the Carnival Fantastique, and Genny's job has never been busier or more fulfilling. Only not everyone is so happy. Genny believed she’d cracked the fae’s infertility curse . . . but the fae are still barren. It’s a devastating plight to which the mysterious Emperor may have the solution – if Genny can find him.

She turns to the vampire Malik al-Khan, only to find he’s wrestling with his own demons and, when the police request Genny’s assistance with a magical kidnap, her own problems multiply too. Is it all unconnected, or can the Emperor help her solve more than the fae’s infertility? Soon Genny is hard on his trail, so it seems she’ll have a chance to ask . . . but will the answer cost more than she’s willing to pay?

Pimpage + a Contest at Mah Site!

Hello my League friends! Can I just tell you that Jane True Book 3, TEMPEST'S LEGACY, IS OUT!

You can see another reading and get some news on a contest to win some Legacy swag, here.

In VERY exciting news, Jane now has an Italian title! It's La Principessa Delle Tempeste. HOW CUTE IS THAT? And I can't wait to see what they do with the cover!

You can see a conversation about Jane in Italian, here. I have no idea what they're saying, but it sounds sexy, doesn't it???

Finally, you can find a contest here, run by the ever lovely and fabulous Carolyn Crane, in which you can win TL.

I am currently gearing up for the January residency of my MFA program. Students will arrive from all over the country (and a few from outside the US), descending on Greensburg to be edumacated in the art of writing popular fiction. I'm running a module on close reading, and one on urban fantasy. Totally looking forward to it! But it's going to be crazy hectic, and the day after everyone l…
Read more