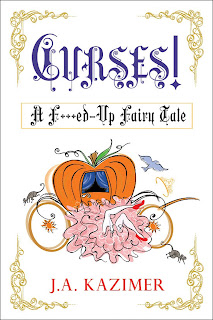 Hi folks! Nicole here. I had the pleasure of blurbing J.A. Kazimer's new book CURSES! A F***ed Up Fairy Tale, and thoroughly enjoyed it. She's very League, so I thought I'd bring her here to do a guest blog. She was gracious enough to agree. Enjoy her fruity fruitfulness!

Hi Ho, Hi Ho, Off to Murder a Princess I Go! : Telling Stories through the Eyes of a Villain

In CURSES! A F***ed Up Fairy Tale, I didn’t set out to murder Cinderella (or any other princess for that matter). Things just sort of happened. I swear it. One minute I’m writing a sweet little fairy tale and the next I’m running Cinderella over with a bus. I tried to swerve. I really did. But before I knew what happened, the poor princess was squished under five tons of bus parts. From there, things just got weird as the narrator, a villain called RJ, took control of the tale.

So why write a fairy tale through the eyes of a villain? In many ways I didn’t have a choice. In other, far more fun ways, the chance to view the world as a villain was irresistible. Through his eyes, fairy tales took on a different slant. Questions arose, like, where does a villain live (The Easter Village, of course) and what does a villain wear on his days off ( a ‘Your Lair or Mine’ t-shirt) racked my brain. What did a villain order for dinner? Pease Porridge, lukewarm? Curds and whey? Did he enjoy being a villain? Or was it more of a family tradition, evil deeds handed down from one generation to the next?

Heroes often fill our tales, white knights on horseback with perfect features, guys who always say the right thing like, No, those pants DO NOT make you look fat, and bad boys who aren’t so bad. Heroes are easy. They have flaws sure, but those flaws are part of their hero charm. The biggest hero flaw is often a lock of wayward hair falling devilishly over one eye. Heroes eat Wheaties for breakfast. They live in lofts or mansions in cities like Gotham (For the life of me I can’t figure out why anyone would live there. The crime rate is unbelievable). They are at heart- good. Who wants that in a protagonist?

Viewing the fairy tale world of New Never City through the eyes of RJ offered a series of insights and adventures I’d only imagined in my nightmares. That’s what writing should do, transport the reader and sometimes even the writer to a place we’d only dreamed of, a place filled with pilfered baby candy. A place where villains save the distressed damsel and Prince Charming practices a dance number. A place even the blackest of hearts can live happily ever after.

j.a. kazimer is a writer living in Denver, CO. With a master’s degree in forensic psychology, j.a. has worked as a private investigator, bartender, and at the Jack Kerouac School of Disembodied Poetics. Books include The Junkie Tales (2010), The Body Dwellers (2011), CURSES! A F***ed-Up Fairy Tale (2012), and Holy Socks & Dirtier Demons (2012). The next book in the F***ed Up Fairy Tale series, FROGGY-STYLE, is forthcoming from Kensington in 2013. Visit j.a. kazimer’s website at http://www.jakazimer.com

CURSES! A F***ed Up Fairy Tale

Definitely not for baby’s bedtime reading, this hilarious and irreverent take on classic fairytales—think Shrek for grownups—combines humor, mystery, and characters only a fairy godmother could love…

When Cinderella is run over by a New Never City bus, her not-so-ugly stepsister, Asia, suspects murder. So she hires RJ, a private eye, to investigate. Little does she know RJ is actually a villain on mental health leave from the Villain’s Union. Cursed with an inability to say no to damsels in distress, RJ travels to the Kingdom of Maldetto, meets the rest of Cinderella’s family—including her fiancé, the flamboyant Prince Charming, Cinderella’s crazy stepmother, and a seriously twisted version of Hansel and Gretel—and dodges bullets, explosions, fires, and his own ex-wife to slip his own version of glass handcuffs on the wrists that fit. All while falling for Asia, who has a curse of her own to deal with…

Donna said…
I love it. One of my all time favorite books is Villians by Necessity by Eve Forward. Without the bad guys life would be terribly boring. At least in fiction.
March 15, 2012 at 7:00 AM

Karen said…
I went from giggling to laughing out loud while reading Curses! I definitely recommend it because besides being ridiculously funny, it has an excellent story. And I love RJ - his annoyance at not being able to do the right thing made me feel bad for him. I loved how the various fairy tale characters come into play and how cleverly they're twisted. If you haven't read this book, I can only say you're missing something good.
:D
March 15, 2012 at 8:48 AM

J.A. Kazimer said…
Thanks to Nicole and the League for having me. It's really an honor. I've dreamed of being a reluctant adult for years.

Glad you like the title, Mario. I kind of figured you would.

Hi Donna, that is a great book. I love the idea of villains.

Hi Carolyn, thank you. I'm so happy to be here.

F.T., you know that you are far cooler than I.

Thank you, Karen. That means alot.

BEACH BLANKET BLOODBATH hit the streets over the weekend, two days early (believe me, I was just as surprised as anyone). And it's already hitting the lists (#12 in Satire, #55 in Urban Fantasy). Here's what's the dillio:  Zombie socialite, Amanda Feral, and her undead friends, Wendy and Gil, shamble into an idyllic seaside village for an event promoting Amanda's memoir, HAPPY HOUR OF THE DAMNED and, as usual, to get some rest, relaxation and consume cute coastal townsfolk. As is their unique luck, plans are derailed when they become embroiled in a gory mystery at the Miss Sand Flea Pageant. Beset with perky, sinister go-go dancers, the inevitable wereshark attack and an annoying octogenarian writer, Amanda must, once again, take time out of her busy schedule of critique and ridicule to solve the crime and save a local bookseller from ruin. You can pick it up now (except not at B&N or iBooks, because ::shrug:: I have no idea why they're so slow
Read more