By Carolyn Crane - July 05, 2011
So many awesome league releases today, I'm devoting my post to it.


First off, Diana Rowland is launching her awesome new series with WHITE TRASH ZOMBIE, and if she hits the NYT list, she'll be getting this tattoo!

MY LIFE AS A WHITE TRASH ZOMBIE by Diana Rowland
The description, from the author’s site:

Angel Crawford is a loser.

Living with her alcoholic deadbeat dad in the swamps of southern Louisiana, she's a high school dropout with a pill habit and a criminal record who's been fired from more crap jobs than she can count. Now on probation for a felony, it seems that Angel will never pull herself out of the downward spiral her life has taken.

That is, until the day she wakes up in the ER after overdosing on painkillers. Angel remembers being in an horrible car crash, but she doesn't have a mark on her. To add to the weirdness, she receives an anonymous letter telling her there's a job waiting for her at the parish morgue--and that it's an offer she doesn't dare refuse.

Before she knows it she's dealing with a huge crush on a certain hunky deputy and a brand new addiction: an overpowering craving for brains. Plus, her morgue is filling up with the victims of a serial killer who decapitates his prey--just when she's hungriest!

Angel's going to have to grow up fast if she wants to keep this job and stay in one piece. Because if she doesn't, she's dead meat. 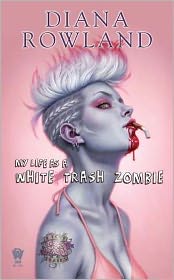 Check out this excerpt...
****
A SHOT IN THE DARK by K.A. Stewart (Jesse James Dawon #2)
The second installment in the fabulous Dawson series!
The Open Book Society: had this to say about book #1: "This crackling series launch hits the trifecta of strong story, characters, and prose. Jesse James Dawson is a retail clerk, a samurai, a redneck brawler, a good husband and father, and a Champion: a demon slayer who fights to free repentant souls from hastily entered contracts." 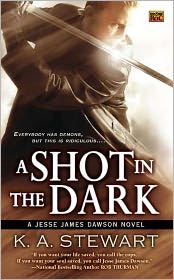 The blurb: Jesse James Dawson is a Champion, putting his life on the line for those foolish enough to bargain with demons and fighting to save their souls. But even a Champion needs some downtime, so Jesse takes his annual camping trip to Colorado for some male bonding over friendly games of paintball.

Unfortunately, the fun and war games are interrupted by a pack of creatures summoned up from the very depths of hell by an entity Jesse prayed he’d never see again. With the lives of his friends and a teenager’s soul on the line, Jesse’s only hope may lie with an even more dangerous enemy–his personal demon, Axel…

****
HAMMERED by Kevin Hearne (Iron Druid Chronicles #3)
Our little Kevin is kicking serious ass with this series! Check out a Hammered sneak peek!!
Here, from Publisher's Weekly:
In the adrenaline-spiked third Iron Druid adventure (following Hounded and Hexed), Atticus O'Sullivan, the 1,200-year-old sexy warrior druid, pops into Asgard, steals one of the golden apples of immortality, and zips back out again. Piece of cake—until he has to go back and face off against Thor, the extremely irritating Norse god of thunder. Thor has annoyed a whole lot of people over the eons, chief among them Leif Helgarson, an ancient vampire with a mighty grudge. Atticus reluctantly teams up with Leif and Gunnar Magnusson, the alpha werewolf of the Tempe, Ariz., pack, to take Thor down—that is, if everything goes according to plan, which it never does. Hearne provides lots of zippy plotting and rocking action scenes, and fans will be thrilled by hints that the series is set to continue. 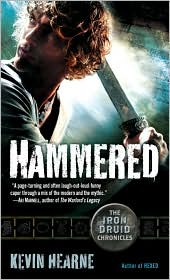 The pub blurb: Thor, the Norse god of thunder, is worse than a blowhard and a bully—he’s ruined countless lives and killed scores of innocents. After centuries, Viking vampire Leif Helgarson is ready to get his vengeance, and he’s asked his friend Atticus O’Sullivan, the last of the Druids, to help take down this Norse nightmare.

One survival strategy has worked for Atticus for more than two thousand years: stay away from the guy with the lightning bolts. But things are heating up in Atticus’s home base of Tempe, Arizona. There’s a vampire turf war brewing, and Russian demon hunters who call themselves the Hammers of God are running rampant. Despite multiple warnings and portents of dire consequences, Atticus and Leif journey to the Norse plain of Asgard, where they team up with a werewolf, a sorcerer, and an army of frost giants for an epic showdown against vicious Valkyries, angry gods, and the hammer-wielding Thunder Thug himself

****
BURNING DOWN THE SPOUSE by Dakota Cassidy

“What I love about this book is the fact it is written with a heroine over 35 and her leading man is not some "young stud", proving a romance doesn't have to be about twenty-something’s. I also enjoyed the little entries from Frankie's "journal" before the beginning of each chapter. Dakota always makes me laugh when I read her books, and this was no exception.”
~From Night Owl Romance 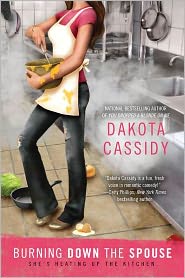 Publisher blurb: If you can't take the heat, get out of the kitchen...the latest from national bestselling author Dakota Cassidy!

After discovering that her famous chef husband was cheating, Frankie Bennett lost her mind-on live TV. Now Frankie is broke, unemployed, and hiding out in her aunt's retirement village. That is, until Maxine Henderson-Barker-reformed trophy wife and owner of Trophy Jobs Inc. employment agency-arrives to give Frankie a much needed kick in the pants.

Soon, Frankie lands a job as a prep chef at a Greek diner in New Jersey, home to the world's best meatloaf and an owner who resembles an exquisitely chiseled Greek statue. Falling into bed with Nikos isn't the best idea, but after years of living in a man's shadow, this ex- trophy wife is ready to get busy cooking... 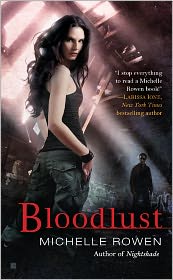 ONE TASTE IS ALL IT TAKES

For those who feast on blood, Jillian Conrad is a fatal attraction. After being injected with a serum that made her blood both irresistible and deadly to vampires, she was used as a pawn to assassinate the vampire king. Now, the vampires want her eliminated.

Hunted and unable to return to her old life, Jillian desperately seeks to prevent the poison in her veins from killing her. And she must find a way to help her dhampyr protector, Declan, whose exposure to the serum has split his personality into one part uncontrolled desire, and one part stone cold killer.

But an even greater danger is rising. The Amarantos – a secret society of vampires – is seeking the infant daughter of the slain king to complete their quest for true immortality. And if they succeed, no one, living or undead, will escape the darkness.

I'm so proud of all my fellow leaguers with their fabulous releases. Have a fun day, you guys!

Bets Davies said…
Really excited about White Trash Zombie. I hope she really does eat a lot of brains. And Rowland should get her tattoo now, because we should dwell on our art, not our popularity
July 5, 2011 at 8:00 PM