Coming Soon: A Fury of Furies

We're less than two weeks away from the release of my fifth book, Tempest's Fury. For those of you who have been ignoring me assiduously, here's the cover: 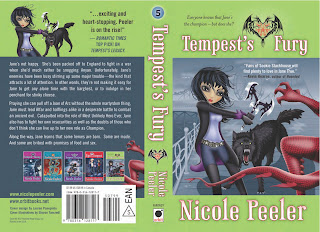 Fury is the penultimate book of the series, as I always knew I wanted Jane to have six books. My reasons for that are simple: I wanted to end in control of the character and the book, and in a way that satisfied me and, hopefully, my readers. As a reader myself, I remember with love the series that left me wanting more--the ones that ended when I was still involved, still engaged. So that's how I wanted Jane's story to be. I wanted to end before I lost the flow of the original idea, or got bored with my own character, or bored my readers.

That said, it's hard writing a series, and six books is a lot. I think that part of the problem is that once we invest in a series, we all have things we want to see happen, and we have a way we want it to happen. That's why Choose Your Own Adventures were so much fun. Yet how many of us, even with all the choices available, were constantly looking for options that weren't there?

Unlike Choose Your Own Adventures, however, most books can only have one story, and it had to be mine. I hope people like the direction I take Jane, and can see how her character has evolved, and why I made the choices I made.

I've grown up with Jane, as a writer. She was my first baby (or my first pancake, for those of you who never quite got her). I've loved seeing her grow, and as I'm revising book six, I'm sad knowing I'm going to have to move on. But, to be honest, I'm not that sad. I'm proud I was allowed to write all six books, and I'm proud I'm only writing six. I'm thrilled I got to have a first pancake, and that I still think it's pretty tasty. I'm also excited to move on, and to utilize everything I learned writing Jane in new ventures.

So I hope you enjoy book five and, ultimately, book six. I know I've enjoyed writing them, even knowing it's time to say goodbye.

Donna said…
I've truly enjoyed the Jane True series, thank you for writing these books. I especially love listen to them on audio books, and can listen to them repeatedly, kinda like re-reading. Are all of the books going to be produced in audio books like the first three?

I've been out of pocket so I was wondering if you will have something new coming after you finished with the Jane True series?
June 15, 2012 at 8:17 AM

J M Kline said…
I can't wait to finish Jane's story! Thank you for letting us all know how many more to expect. I know I get frustrated when a series I love ends without warning.
June 15, 2012 at 8:46 AM

Nicole Peeler said…
Donna: Thank you! Unfortunately, the company that makes the audios hasn't bought the last three, and I don't think they will. I wish I had better news, but I don't control these things. :) As for what's next, I'm working some stuff, we'll see. :)

J M Kline: You're welcome! Although usually when a series just ends it's not because the author wanted it to, it was because the publisher didn't buy any more books. I was lucky I was able to do Jane the way I wanted to, especially in today's world. :)
June 15, 2012 at 9:23 AM

Unknown said…
I just want you to know that I thought Tempest's Fury was fabulous (consider myself quite lucky to have been given that sneak peek!). I completely understand the desire to end the series before it gets out of control but I'm nonetheless sad that Jane will be over soon! I'm sure you get asked this too damn much but...Do you have an estimate on when the final book will be released?
June 15, 2012 at 12:54 PM

Donna said…
Aw, that stinks! Thanks for letting me know about the last three audio books. I wish it were different. :(

I'll keep a look out for your new stuff!!! And I'm looking forward to the rest of the books in the Jane True series. It is nice knowing there is an ending (not another never ending series) and that you're getting to end the series the way you want it to.
June 16, 2012 at 10:11 AM

Nicole Peeler said…
Bonnie: So glad to hear that you like Fury! And don't quote me on this, but I think the sixth book is out May 2013. I think.

Anonymous said…
If you keep writing, I'll keep reading it! It's always sad when a beloved protagonist goes into hiatus (or even retirement), but it's also great to discover a new and wonderful character by one of your favorite authors.
June 20, 2012 at 8:46 PM

Nicole Peeler said…
Thanks itsnotgonnawriteitself! :) Hopefully I'll have something new to announce soon. :)
June 25, 2012 at 1:36 PM

Jello said…
It is very hard to find a new series of paranormal books, if you are an avid reader, that doesn't FORCE you to finish the other books after the 1st or 2nd. Your Jane True series was a taste of chocolate when expecting cocoa. I love how you insert quotes and pivotal books into Jane's thinking. So many paranormal writers go for the physical and not the psychological effect a character has on the reader. She's vunerable, smart, has moments of self-doubt, and fills her thinking with ADD moments when faced with a crisis. In other words, you are an extremely smart, well-read, writer. Keep doing what you do and doing it the way you do. Or, go the 180 degree turn and write a main character who is dumb-as-a-bag of hammers..But, keep writing! I love your work! By the way I am 52, teach 4th grade, and read all books in 3 days!How's that for demographics?
July 6, 2012 at 12:28 PM

BEACH BLANKET BLOODBATH hit the streets over the weekend, two days early (believe me, I was just as surprised as anyone). And it's already hitting the lists (#12 in Satire, #55 in Urban Fantasy). Here's what's the dillio:  Zombie socialite, Amanda Feral, and her undead friends, Wendy and Gil, shamble into an idyllic seaside village for an event promoting Amanda's memoir, HAPPY HOUR OF THE DAMNED and, as usual, to get some rest, relaxation and consume cute coastal townsfolk. As is their unique luck, plans are derailed when they become embroiled in a gory mystery at the Miss Sand Flea Pageant. Beset with perky, sinister go-go dancers, the inevitable wereshark attack and an annoying octogenarian writer, Amanda must, once again, take time out of her busy schedule of critique and ridicule to solve the crime and save a local bookseller from ruin. You can pick it up now (except not at B&N or iBooks, because ::shrug:: I have no idea why they're so slow
Read more