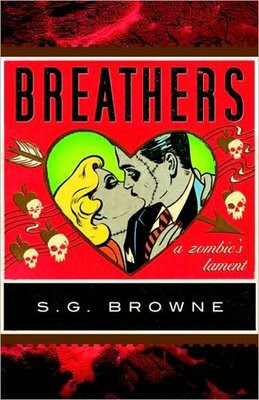 S.G. Browne, the author of Breathers: A Zombie’s Lament (Broadway), sat down recently with several of the stars of Breathers for a little Q&A:

Jerry: How about a little T&A instead, dude? (snickers)
Andy: Don’t mind Jerry. He has a permanent, post-mortem erection.
Jerry: (popping an Altoid) Terminal boner. Popular with the ladies.
S.G.: (ignoring Jerry) So what’s it like to be a zombie?
Andy: Not that much different than working for corporate America. Except you don’t earn a paycheck. And you have to worry about getting infested with maggots…
Tom: And fraternity pledges dismember you. (massages his empty right arm socket)
S.G.: When did you first realize you were no longer among the living?
Jerry: At my funeral. Totally freaked out my parents. I’ve got the video if you want to watch.
Tom: When I woke up in the mortuary and the mortician was packing my external body cavities with autopsy gel.
Jerry: Dude.
S.G.: What do you miss most about being a Breather?
Jerry: Getting laid.
Andy: Going out to dinner and a movie.
Tom: Sitting around a beach bonfire without having to worry if someone’s going to throw me into it.
S.G.: Do you believe in God?
Andy: When you can smell your own rotting flesh, it tends to put the kibosh on your belief in the existence of a supreme being.
S.G.: How fast do you decompose?
Andy: We were all embalmed prior to reanimating, which helps to slow decomposition down to a crawl. Still, without a regular formaldehyde fix, it’s only a matter of weeks until your organs turn to chicken soup.
S.G.: What are your favorite foods?
Jerry: Bacon, dude. You can never have too much bacon.
Tom: I’m a vegetarian.
S.G.: I thought zombies were flesh-eating monsters with an insatiable appetite for brains.
Andy: That’s just Hollywood propaganda. Most zombies are too busy trying to deal with a rapidly digesting pancreas or keeping their tissues from liquefying to be obsessed with eating the brains of some uptight Breather.
S.G.: Speaking of Hollywood, I understand the film rights to Breathers were purchased by FOX Searchlight Pictures? Do you think they’ll portray zombies in a positive light?
Andy: FOX Searchlight has a pretty good track record and the film’s being co-produced by Mason Novick and Diablo Cody, so I’m pretty hopeful.
Jerry: Diablo Cody. She’s totally hot.
S.G.: Is there anything else you’d like to share?
Andy: Zombies are people, too.
Tom: I miss my arm.
Jerry: Dude, you got any Playboys?

Learn more about Breathers, a dark comedy about undeath through the eyes of an ordinary zombie, at the official website: www.undeadanonymous.com.

FREE STUFF! Enter to win a personalized, autographed copy of Breathers: A Zombie’s Lament by S.G. Browne. All you have to do to enter is spread the word about Breathers and reply to this entry with the blog or message board or link where you posted, along with an e-mail where I can reach you. That’s it. (And no, I don’t add e-mails to any mailing lists unless requested.) Contest ends March 30th. Good luck!

Anonymous said…
I love all things zombie. I am totally intrigued by this book and it is going on the purchase list.

I also pimped you out over on my livejournal.

Anonymous said…
I pimped you out over at my LJ: http://nightdweller20.livejournal.com/9522.html

I've been wanting to read this ever since Amanda Ashby was talking about it!

Anonymous said…
I pimped the book over at the All Flesh Must Be Eaten boards.

What's AFMBE? It's a zombie survival role-playing gaming that has me as a Line Editor. It's also ridiculously fun for sitting around a table, rolling dice, and playing make believe.

It's the only RPG that I ever got non-gamers to play in, and every time they loved it. I guess there is something universally enjoyable about hordes of zombies munching on people.
March 24, 2009 at 3:33 PM

GB said…
Thanks for the great interview.

I've pimped your book on my blog:
http://wakefield-manor.blogspot.com/

Anonymous said…
It's about time we showed our good ole zombies some lovin'. Haha, I pimped the book over at Book Reader Times' Message Board.

I posted it on my sidebar under contests:
www.sharonlovesbooksandcats.blogspot.com
March 24, 2009 at 6:08 PM

Anonymous said…
Ooops, forgot to include an email address

Michael said…
I pimped the book on my blog (http://fft5305.blogspot.com/2009/01/rom-zom-com.html). I have also left several comments on www.mania.com, any time the subject of zombies comes up, encouraging people to check it out.

Ruth Schaller said…
I've gots you pimped out over at my blog. Here is the link:

But count me in! I love zombies!

Anonymous said…
im a guessing, that zombies is the new supernatural theme books that is in? way cool!
though still love my vamps

Anonymous said…
I blogged about the contest. Here's the link. http://carolsnotebook.wordpress.com/2009/03/30/giveaways-in-blogland/
Thanks for entering me.

S.G. Browne said…
I just wanted to thank everyone who participated in the BREATHERS contest and pimped out Andy and his friends at Undead Anonymous.

After a very scientific and painstaking drawing (I printed up the entries, then cut them out into similar size slips and folded them into tiny little squares that I then threw into a Peter Grimm hat and mixed up while listening to "Re: Your Brains" by Jonathan Coulton), I came up with a winner.

Congratulations to (drum roll please)...Celeber, who just so happens to be the first post but trust me, there was no money that changed hands. Only brains.

Thank you again to everyone for participating. I'll be throwing another giveaway later this month on my Facebook fan page, if you're interested in hanging out there. You can find me on Facebook under S.G. Browne or you can follow me on Twittter at s_g_browne.