By Jeanne Stein - March 14, 2009
Mario and gang. I keep expecting pictures or a blog entry or SOMETHING!! Where are they?

Did you guys catch Castle? Any comments. Overall, I liked it. A few clinkers, like the detective handling evidence with her bare hands, but Nathan was great. Loved James Patterson and Steven Cannell as his poker playing friends. Rumor has it that Sue Grafton and Stephen King may make cameo appearances in later episodes.

Now for some good news/bad news.

As my writer friends can attest—nothing is better than a story that is going well. I find myself in that happy situation now. I’m working on the sixth book, Chosen, and I can’t type fast enough. It’s scary. That’s the good news.

The bad news is that I’ve devoted much less time to accumulating blog stuff. So this issue will be abbreviated—we’re going to visit Michele Bardsley and J. F. Lewis in their lairs. And I’m going to remind you of the contest at the end, but that’s pretty much going to be it for this week.

There is one other thing. I’m running out of Leaguers for this feature. So here’s the deal: How about letting me know whose writers’ rooms you’d like to see next. I’ll contact the authors and see if they’d care to participate. Put your suggestions in the comment section, I’ll do the rest.

So here we go:

Michele says: I'm always behind, but between my supplemental websites for the series and fans along with writing new proposals and doing massive rewrites, AND single motherhood, I'm surprised I remember how to breathe.

Here are the photos of the office, well, it's a corner of my bedroom. LOL.
I snapped that second photo after Cassanova made an appearance, and I had started clean up. Notice that I didn't actually clean up for the first photo. LOL. 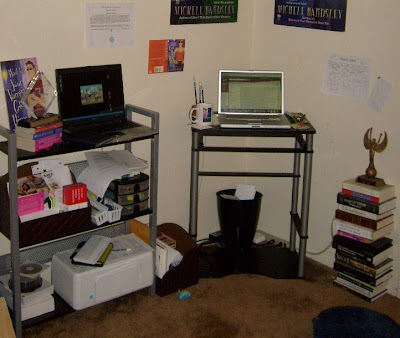 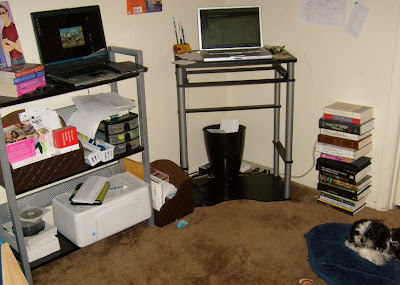 I say: How can you tall the difference? Except for Cassanova, of course, who is really cute, and the trophy on the stack of books. What is that by the way? It looks like a cross between an Emmy and an Oscar.

J.F. (Jeremy) Lewis says: Two versions one with an "orb" and one without. 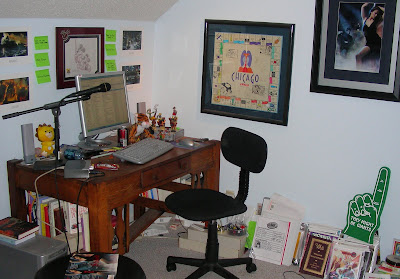 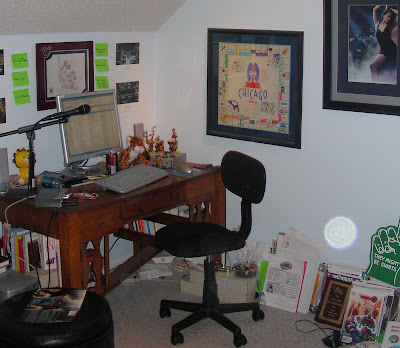 I repied: what is an orb? To which J.F. replied: The short version: an orb is backscatter that presents itself in photos as circular shapes not present in the picture. Paranormal investigator types feel this is a sign of ghostly stuff, but really, it's just a technological weirdness.

Okay—really, I should have made both of these writers’ spaces into one of those kids games: How many things can you spot that are different in picture 1 than picture 2. Go ahead and do it if you have the time...

Now a reminder about the contest.

Answer this question in 250 words or less:

If you could spend one unbridled night with any fictional character in the world, who would it be? Why? What would you do? 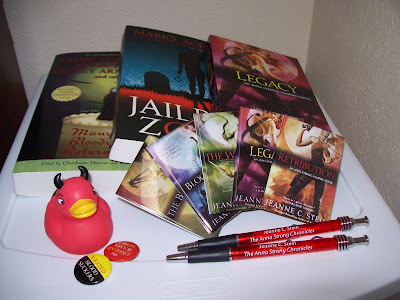 Prizes: Legacy, Many Bloody Returns, magnets and pens from me—Jailbait Zombie, buttons and a devil duck from Mario. Deadline: Midnight Sat. March 21—Mario and I constitute the panel of judges and our decision is final (that sounds SO official, doesn’t it?) The winner will be announced on the Biting Edge March 26—

Now, I’ve gotten a few entries with just names and addresses. I think what we have here is a lack of communication. For such a fabulous cache of prizes, you have to work.

Send your entries to: Jeanne@jeannestein.com
In the subject line, please put “contest”

So, that's it for this week. Your assignments, should you care to accept, are:

#1 Send me author names for the Writers' Rooms feature

This message will self-destruct in thirty seconds....

Anonymous said…
Michele has two laptops going there. I always wonder if people write on both, or if they write different stories on each, or what. Maybe separate writing and an internet computers?

The second set of photos...glad to see there is still someone else who writes on a desktop. I was starting to feel behind the times.
March 14, 2009 at 8:36 AM

Jeanne Stein said…
Don't fret, Tom, most of my writing is done on my desktop, too--a Mac that I love.

Anonymous said…
1. Is anybody monitoring the news for dastardly doings in the towns on Mario's itinerary? If there are no blog posts then clearly that group is up to no good.

2. Have we seen YOUR room yet Jeanne? I don't recall that we have.

Anonymous said…
>>I’m running out of Leaguers for this feature. So here’s the deal: How about letting me know whose writers’ rooms you’d like to see next.

She posts regularly on the forum for the Masque comic:
http://www.gocomi.com/sn/forum/topics/id_4/

Do they have to be UF writers?
If not:
Glen Cook
David Weber
Terry Brooks
GRR Martin
Elizabeth Moon
March 14, 2009 at 5:44 PM

Jeanne Stein said…
Hi Gina-- No to all three of your questions.

As for my room, I was going to post it in the last group. The three (besides me) that are left are Anton Strout (who just moved) Caitlin Kittredge (who is doing some remodeling) and Stacia Kane (also in the middle of a move.)

Any suggestions for future gueats?

Jeanne Stein said…
Got the names, Natalie. thanks.

Jeanne Stein said…
Glad you didn't give it much thought, Vickie, or I'd be emailing all night!

Gina said:Whoa, sweet list! Someone has their job cut out for them. =D

I think you're rolling up a lot of people's comments and attributing it to me ;) Not that I mind, it's making me chuckle.

Don't know why I didn't think of this
before but you should include the author of my #1 fascinating anti-hero, Juno Mozambe, who makes me hungry for lizard tacos. Yes, that would be Warren.
March 17, 2009 at 9:39 PM