By Richelle Mead - October 12, 2011
As a fan of low cut shirts, I usually don't have a problem with sexy anything. Each Halloween, however, I'm forced to re-evaluate this position as costume manufacturers continue to inundate me with new and increasingly outlandish "sexy" ideas for women to strut their stuff in. While these aren't the skankiest outfits out there, these are the top three that have caught my attention this year:

This is part of an animal set, which also includes sexy fox and skunk costumes. Now, one might argue that the skunk is the more appalling sexy choice. And that would be a fair argument. Yet, this is the one I'm continually fascinated by. I don't know why, nor can I figure out who would be on board with this. Mostly I think it has to be someone like me who keeps scratching their head over it and finally just gives in. I suppose the mask and tail have sex appeal, but I'm not going to lie. Every time I look at this, I just think this girl is saying: "You like what you see, baby? You wanna go rummage through the trash with me? Yeah, you want that. That's exactly what you want. Hope you've got your rabies vaccine." 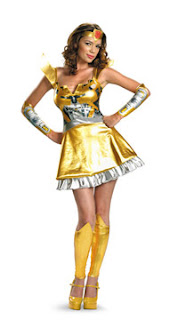 No, not a bumblebee. I mean Bumbleebee, the character. The robot that turns into a car from Transformers. This one amazes because I have to wonder, what designer sits in a room and thinks, "You know what would be sexy? A giant, bulky seemingly male robot turned into a slutty dress." More puzzling still is the same old quesiton: who gets this? As a fan of Voltron and He-Man, perhaps I shouldn't judge. Maybe there's some girl out there with a childhood love of Transformers, and this is her dream come true. Mostly, however, I picture this as something the girlfriend of a guy like Comic Book Guy from The Simpsons would wear for a hot night of sexy roleplaying. Except, I have a hard time picturing CBG with a girl like that. 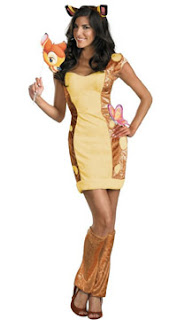 Disney characters aren't newcomers to the world of sexy Halloween costumes. Just look at all the Snow Whites and Jasmines out there. Even this isn't so bad, in and of itself. What worries me is that this is a gateway costume. From here it's only a slippery slope to the inevitable and most disturbing costume of all: Sexy Bambi's Mother.


So, that's my quick assessment of this year's options, but like I said, there are many more out there. What appalling ones have you seen? Can you top these with your own twisted ideas?
Richelle Mead

Bets Davies said…
Hey--I wanted to be Bumblebee as a little girl. Which is why I so would not wear that costume. Creepsville. It is also creeping how many of these sexy girl costumes come out of childhood. Like the Disney characters. There's always a set from non-disney fairy tales, too. Like Little Red Ridinghood with so minimal a skirt, so low a bust line, and so little of a cape, you wonder what her parents were doing letting her out of the house. It sets you wondering what would happen if people went original Grimms fairy tales. More blood than Bambi's mama.

Ellz said…
haha~ great post. I have seen a few of these costumes lately. I thought the fox costume was a bit on the frisky side. The trouble is finding an adult costume that wont cause pneumonia and isn't a zombie. I think I am going to get crafty and make one this year. Cheers!
October 12, 2011 at 6:03 PM

Christine Rains said…
Hehehe! That was great. Any costume that resembles a Furry scares me. Raccoons should not have fishnets. I've seen a few young women dressed as sexy Pokemon. It was like that Bumblebee outfit. Not right!
October 12, 2011 at 6:44 PM

Jess (The Cozy Reader) said…
I haven't seen these costumes! They're really quite, different. I'm not a fan of the "sexy" costumes myself. Maybe if I lost 15 lbs I'd be on board.

I'm going as Jessica from True Blood this year. (Yes, my name is Jessica, I have long, dyed red hair, so it's pretty cool). The tight, thin white shirt is as sexy as I'm getting this year. I've plans to pair it with a pair of black yoga pants since the party I'm going to will be mostly outside at a bonfire.

Are you dressing up this year Richelle? How about that new baby!? My little man is going as the cutest teddy bear ever!
October 13, 2011 at 12:39 PM