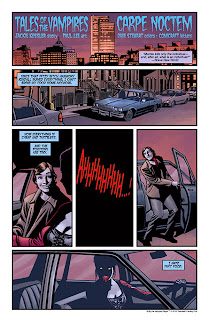 The February edition of "MySpace Dark Horse Presents” will introduce a new writer to the comic book field, dark fantasy/supernatural romance author Jackie Kessler, who will pen a short "Tales of the Vampires" episode of "Buffy the Vampire Slayer Season 8" titled "Carpe Noctem." Kessler, whose novels include "Hell's Bells,""Black and White," and several Young Adult titles under the name Jackie Morse Kessler, is joined on the comic by artist Paul Lee.

* * * *
Winners of the Pacific Northwest Booksellers Association's 2010 Book Awards, which were selected from more than 200 nominated titles by Northwest authors and published in 2009, are:

The Big Burn: Teddy Roosevelt & the Fire that Saved America by Timothy

The Collector: David Douglas and the Natural History of the

All in a Day by Cynthia Rylant, illustrated by Nikki McClure (Abrams
Books for Young Readers)

And last but not least:

Diana Rowland's SECRET OF THE DEMON, three more books in the series that began with MARK OF THE DEMON, plus three books in a new urban fantasy series about a young woman who is turned into a zombie and takes a job as a morgue technician for easy access to brains, to Betsy Wollheim at Daw...in a six-book deal, by Matt Bialer at Sanford J. Greenburger Associates.