By Michele Writes - December 02, 2011
The tree is decorated beautifully. Its nine feet tall. Filled with bows and shiny ornaments and sparkly lights. The family decorated it happily. Putting everything just so, too. The Viking put on the tippy-top ornament and I put on the decorative skirt.

Then came the cat.

There are two cats. The one who is not in trouble because trees with lights and ribbons and dangling objects bore him. Plus, he'd rather nap. Then there is the other cat.

Naughty cat. The terror of holiday trees everywhere. He lounged in the corner under the tree watching the humans create his kitty Disneyland. He was scatted and shushed and chased away from the tree. Our perfect, beautiful tree.

He killed the first ornament within an hour. It was a big, shiny silver wonder ... now a thousand shards. The cat endured a rousing game of "Hiss and Chase" and disappeared.

The humans were lulled into contentment. Eventually they stopped talking and listening to Christmas music and went to bed.

Naughty cat returned to the tree. His playground. For a whole night.

When morning came, four ornaments had been knocked off. One was missing a hook.

Cat waited. And later, he killed another ornament.

And the next day? He climbed into the branches because the GOOD toys were in the middle. And he killed another ornament ... this one was special. A favorite.

Cat does not understand the meaning of Christmas. Or staying away from trees. Or how irritated his humans are because he's RUINING THE HOLIDAYS.

Naughty Cat, you are getting COAL in your stocking. And no, it's not a toy. It's not. Damn it. Who's up for another game of Hiss and Chase? 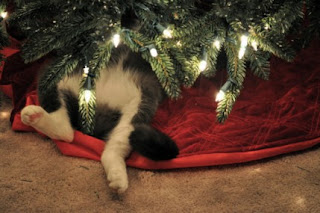 Roxanne Rhoads said…
I'm glad my kitty doesn't do that, she's content to lay under the tree and look like a furry present.

I've never had a cat who went crazy like that, I did have one a long time ago that would bat all the ornaments off the bottom branches though. We had to stop hanging them so low.

Funny had to do the same thing when my youngest was a baby. He'd steal them. Come to think of it, he's 5 and not much has changed. He still steals ornaments especially the candy canes which he eats and my mini stuffed moose which he seems to have a fondness for hiding under the couch.
December 2, 2011 at 3:07 PM

Carolyn Crane said…
Hah! Fabulous! So funny. We used to have a special kitty ornament that hung low on the tree - a knit thing we knew the cats would tear off, but we'd just put it on again.
December 4, 2011 at 11:42 AM