By Kelly Meding/Kelly Meade - November 09, 2009
Who knew that when my initial release date was pushed back by a month, it would give me the chance to "meet" fellow debut author Kelly Gay? Her urban fantasy, THE BETTER PART OF DARKNESS, releases November 24 from Pocket. Kelly is not only an awesome writer, she's funny, smart and brave enough to take time out and do an interview for the League. 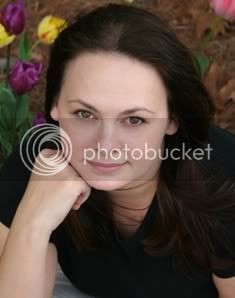 --According to your website, you began your writing career with screenplays and won quite a few awards. What made you switch from screenplays to writing novels?

There were a few factors in making the switch. I was getting burnt out writing screenplays. I was in L.A., had an agent, had gotten some work, and made some awesome contacts, but never that spec sale I’d been working toward. I was away from my family, had a lot of downtime, so I started rethinking, started going through several unfinished manuscripts I had on the computer – all those novels I’d tried to write and never got beyond the first few chapters. I loved the brevity of screenwriting and would always return to what I knew. But once the burn-out set in and I had this patch of time to myself, I decided to sit down and write a novel, start to finish. Just to see if I truly had it in me. I guess it was the right time in my life.

I started and finished in three and a half weeks. It was seriously bad stuff. But I proved a point to myself. And I learned that delving deeper, getting into the mind of my characters – something you can’t really do extensively in screenwriting – opened a lot of doors creatively. From that point on, I switched gears and started focusing on fiction. 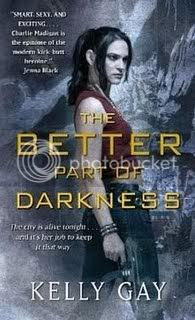 --How did The Better Part of Darkness and heroine Charlie Madigan come to be?

The title came first, followed closely by the vision of a city where the supernatural is a known and a common part of life and putting a single mom heroine into that world where she'd have to make huge sacrifices and choices. I remember sitting at B&N with my CP, Jenna Black, back in ’04, I think it was, and brainstorming her Morgan Kingsley series, and mentioning just this kernel of an idea. It sat for a while, stewing, as I finished two more manuscripts, a paranormal romance and then a YA fantasy. But once those were done, Charlie’s story was ready to be told.

--What was the publishing process like for you? Fast and furious, or long and torturous? What surprised you the most?

The actual process from the time I got an agent and sold wasn't too long. Five or six months, maybe. The whole ‘Kelly Wants to be a Working Writer’ thing – that took over a decade and several screenplays, plays, and manuscripts. Because I’d been trying for so long, I was pretty familiar with the publishing process, so I wasn't really surprised by too much. If anything, I’d say I’m surprised by the amount of work I’m doing promo-wise. Not the work itself, but the time it actually takes to get that kind of work done. It’s fun work, though, and it’s making me a better time manager, for sure!

--Who are some of your favorite authors/books, and how have they influenced you as a writer?

Oh, geez, the list is miles long. Anne Rice, Diana Gabaldon, Mary Stewart, Marion Zimmer Bradley, Emma Bull... There are so many more, but the thing I always take away from these writers are the complexity of their characters and worlds. The worlds might be paranormal in some way, there might be magic or vampires, but it’s all so grounded and so real that, while you’re in that world, you believe it. And the characters are full of contradictions and flaws and everything that makes us who we are. I think it’s the ability to relate to a character that really draws readers in…to care for a character, to root for them, or, hell, even strangle them. All my favorite writers are amazing at doing this.

--What can we look forward to from you in the future? Anything in the works outside of Charlie's world?

There’s a second Charlie Madigan book scheduled for release sometime in 2010. And I have a Young Adult series I’m hoping will find a home soon…

--Five Quickies for you:

Outline or No Outline? Depends on the book. Sometimes I plot, sometimes I pants-it, and sometimes it’s a combination of both.
Vampire or Werewolf? Vampire
Chocolate or Vanilla? Chocolate
Star Wars or Star Trek? Star Trek
Hard taco or soft taco? Hard

And most importantly: Any good (*cough*) stories from your days in Hollywood that you can share?

You mean, like the time I saw Queen Latifah jogging down the sidewalk in Beverly Hills? Oh, yeah. I have some stories . . . They should have some kind of disclaimer on actors. “Actors are smaller in real life than they appear on screen.”  Everyone I met was so much shorter than I thought they’d be!

Thanks so much for having me and my ramblings at The League!

Thank you for stopping by, Kelly!
Interview Kelly Gay

Sara M said…
What a great interview. I love hearing about the road everyone takes to becoming published. And I'm so excited for this book. I'm really intrigued by the main character being a single mom. It's not something you see in much UF but I think it'll be fantastic. =)
November 9, 2009 at 7:30 AM

Unknown said…
Hi Kelly & Kelly :)
Thank you for the great interview! I found Kelly Gay's process to publication inspiring & fueling my own determination. I am so looking forward to getting & reading THE BETTER PART OF DARKNESS (and THREE DAYS TO DEAD).
Thank you again,
Love & Best Wishes,
RKCharron
xoxo
November 9, 2009 at 8:15 AM

I can't wait for your book to be released; it's already on my list of books to buy!

Karen w: Star Trek rules! (Though I am a big Star Wars fan, too. But if I had to chose, my loyalty lies with the Enterprise.)

Pamk: re: my 1st book: That's a good question! I just don't know. It actually did quite well in some contests, so maybe one day when I'm out of my 'dark' period and into the lighter side (it's a paranormal romantic comedy)... Would definitely need some revising, tho. ;-)