By Kevin Hearne - February 24, 2011
Gahh! It seems I'll be the League's only unpublished author for two weeks longer. The release date for Hounded is now May 3 instead of April 19. Release dates for Hexed and Hammered remain the same (May 24 and June 28), so that means I'll have three books out inside of two months. This has nothing to do with printing delays or anything icky; it's nothing more than marketing shenanigans, the inner workings of which are known only by My Publishing Overlords™. But you've gotta be careful pulling shenanigans on a Druid like Atticus. Let's see how he feels about the delay, shall we? 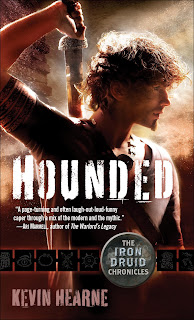 Whoa. It's a good thing, Atticus, I promise!

If you're in the Chicago area and decide to attend C2E2 from March 18-20, turns out Del Rey will be there for the first time and they're going to be giving away copies of Hounded, so if you'd like to score it early there's a hot tip for ya. :)
Hounded Kevin Hearne