Funeral Flowers and Manhattans on the Rocks: drinking and shenanigating at Norwescon

By Kat Richardson - April 22, 2011
So, this weekend I'm at Norwescon in Seattle and as usual it is an endless whirl of drinking, paneling on silly topics and hanging out with friends who are carrying funeral wreaths. 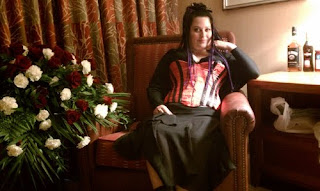 What? You don't usually see funeral wreathes at a con? Well OK I admit I don't usually either, but in this particular case my dear friend Eleanor came straight from a funeral to the convention, carrying the spray of flowers that had been on the coffin--because who really wants to keep all those funeral flowers? And the answer is: SF Fans! (and friends of the deceased who are nice enough to carry them away.)

And what do you need most after a funeral? A Drink! That's right. So plainly one needs both funeral flowers and a pile of alcohol in order to really enjoy a convention because, as they say, live now, for tomorrow we may die. Or go home and take off our corsets and Vulcan ears and go back to work. In the midst of life we are in the presence of death. And taxes. And drininage. And shenanigans.

Cons are not for the sober--at least not the sober of attitude. The marvelous thing about conventions is that not only do you see every thing you ever thought you'd never see, but you get to have as much fun over that fact as you can stand. In fact, you should be having fun--because if it's too much work why are you going at all? Even if you're working the show, it should be fun because life's too short--and so are cons--to not enjoy yourself.

And thus we accept both the funeral wreath and the Manhattan cocktail on the rocks (because we forgot to bring our shaker and cocktail glasses). And we adore the cute dog on the scooter and the author in his bunny suit and the man dressed in a blue body suit and feather fans that are doubling as wings and the woman in green body paint and the child whose head is being eaten by a teddy bear as much as the company of our friends while we also ignore the cost of the drinks and food in the bar.

So put on your Grover suit and come to the bar. We've got plenty of flowers and I'm making Manhattans! (Because the muppets must take Manhattan.) 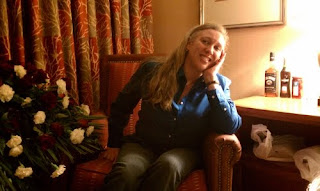